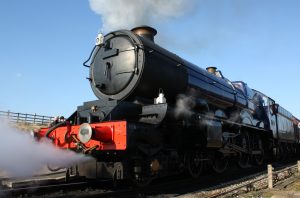 This is the oldest kind of train developed in the early 19th century. It is unlikely that the current generation have seen this train run. The steam locomotive gets its power from a steam engine. Combustible material s like coal, wood and oil are used and this produces steam that enables the train to run. This was quite a cumbersome model for it made the driver and the fireman very tired. Once the driver noticed that the train was running out of fuel, he had to alert the fireman who was armed with a shovel who would put coal into the boiler. If the driver failed to alert the fireman, the train would come to a halt. This train therefore needs a minimum of two crew members to operate. This train also results in harmful environmental effects once gases are emitted into the atmosphere

This train was invented in the late 19th century. The inventor of the diesel engine, Dr.Rudolf Diesel was the first to come up with this locomotive. This train runs on diesel and this is much cheaper and better than steam. This type of train does not require a fireman and this is the average kind of train used in many countries. This train became a popular means of transport for both goods and people. Use of diesel increased the efficiency and effectiveness of the train. The Diesel train has been improved to come up with an electronic version of it. This train however constrains the environment because of the harmful emissions of gases into the atmosphere as it consumes quite a lot of diesel.

This is actually, the train of the future. This is the train that comes to the mind of many current generation folks when the word train is mentioned. This train was actually invented in 1837 by Robert Davidson. Some electric trains are fully powered by electricity and others have a secondary energy source like diesel. Fully electric powered trains have become more famous because they emit clean energy that does no damage to the environment. Usually an electric train draws power from a third rail or an overhead cable. The current drawn from the external source is then transmitted to the engine and charges it up making the train go at a supersonic speed. This means that this train will not run in case of a blackout or a power outage. This is the biggest drawback of this kind of train.

Trains are basically fun and enjoyable to ride in. One gets to see the natural scenery and learns a lot from the experience. Unfortunately majority of people have never seen the inside of a train. It starts with you.

tree removal des moines is our sponsors for the week, thanks for everything you do!